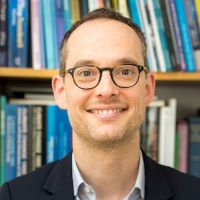 Mathieu Denis worked as a post-doctoral researcher at the Berlin Social Science Centre and the Canadian Centre for German and European Studies.