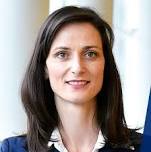 She was previously Commissioner for Digital Economy and Society in 2017-2019. She is affiliated with the European People’s Party, which she was elected First Vice-President of in November 2019. She has also been Vice-President of the EPP Women since 2012. From 2009 to 2017, Gabriel was a Member of the European Parliament. Prior to this she was Parliamentary Secretary to MEPs from the GERB political party within the EPP Group in 2008-2009.

Her responsibilities as Commissioner include ensuring agreement on and effective implementation of the future Horizon Europe programme, advancing the European Research Area and the European Education Area, and updating the Digital Education Action Plan.