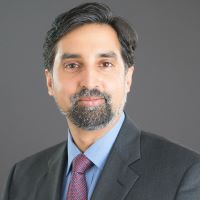 Vikram Savkar is General Manager of the Medicine business at Wolters Kluwer Health, in which capacity he directs the P&L, strategy, and operations of a market-leading global medical publishing/software group spanning the Lippincott medical education publishing and educational technology business, the Lippincott medical and nursing journals business, and Ovid, a leading global research and content distribution software platform for medical research used in 190+ countries.

Prior to assuming this role in late 2019, Mr. Savkar had a diverse career as a leader in STM and educational publishing. From 2012 to 2019, he was General Manager of multiple groups in Wolters Kluwer’s Legal & Regulatory division, including the Aspen legal education publishing and educational technology imprint, and the Kluwer Law International imprint headquartered in the Netherlands. From 2007 to 2012 he was Senior Vice President and Publishing Director of Nature Education, the newly created global science education wing of Nature Publishing Group, publisher of Nature and Scientific American. From 2000 to 2007 he held a succession of roles within Pearson’s Higher Education publishing division, including Director of New Ventures for the Learning Solutions Business. Prior to his career in publishing, he worked as a Special Assistant to the Conductor of the Boston Philharmonic Orchestra from 1997 to 2000, building on his background as a pianist.

Mr. Savkar earned B.A. degrees in Physics and Classics from Harvard University, graduating in 1995. He lives in Cambridge, Mass., in the U.S. with his wife and daughter, and has previously lived in Germany and India.