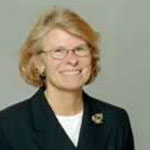 Dr. Jane Barnsteiner is an Emeritus Professor at the University of Pennsylvania, School of Nursing where in addition to her teaching responsibilities she was Director of Translational Research at the Hospital of the University of Pennsylvania. Her scholarship focuses on evidence-based practice, translational research and patient safety. She is the Editor for Translational Research and Quality Improvement for the American Journal of Nursing.

Jane was one of the developers of the Quality and Safety in Nursing Education (QSEN) initiative and is co-editor of the text: Quality and Safety in Nursing: A Competency Based Approach to Improving Outcomes, published by Wiley. She is also co-editor of the book Person and Family Centered Care published by Sigma Theta Tau, International in April, 2014. Both books received AJN book of the year awards.

She has been honored for her work with the Eastern Nursing Research Society Distinguished Researcher Award and the Sigma Theta Tau International Dorothy Garrigus Adams Award for Excellence in Fostering Professional Standards. In 2009 she was awarded the Lindback Award for Distinguished Teaching from the University of Pennsylvania and in 2014 she received the Alumni Award for Distinguished Leadership from the School of Nursing. She is a member of The Joint Commission Patient Safety Advisory Group and the National Council of State Boards of Nursing Transition to Practice study. She is a member of the American Academy of Nursing.