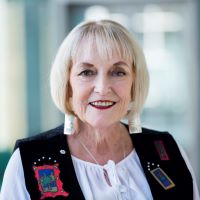 Deborah Poff is a retired Professor of Philosophy and Senior Academic Administrator. She holds four degrees from three universities in Canada (University of Guelph, Queen’s University, Carleton University). Her Ph.D. was in Philosophy of Science. During Deborah’s career, she was variously the Director of a Research Institute; a Dean of Arts and Science; a Vice-President Academic and Provost and a President and Vice-Chancellor at various Canadian Universities.

During her career, she has also been an active researcher, teacher and editor and is the founding Editor in Chief of the Journal of Academic Ethics which she edited for over 20 years. She is currently the Editor of the Journal of Scholarly Publishing, published by University of Toronto Press. Throughout her career, she has been the editor of five scholarly journals, a book series and has published numerous other monographs and anthologies. Her research and publication areas are: Applied Ethics, including Business and Professional Ethics; Research Ethics, Publication Ethics, Leadership Ethics and Feminist Studies. In 1995, she was awarded a lifetime honorary membership by the Canadian Research Institute for the Advancement of Women in the category of “Outstanding Contribution to Feminist Scholarship”. Her most recent publication is an anthology entitled “Corporate Social Responsibility and University Governance”. Her monograph in progress is on the history of discrimination from Aristotle to Now.

Among her many service accomplishments, she served nine years on the Committee on Publication Ethics Council and Board of Trustees, including in the role of Chair, and is a recognized leader in the field of publication ethics.

In 2016, Deborah Poff was awarded the Order of Canada through the Office of the Governor General of Canada.