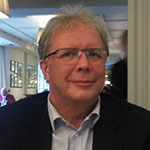 Dr David Green was formerly Journals Global Publishing Director, and is now Programme Director of Digital Content Programmes at Taylor & Francis Group.  He has been in academic and scientific publishing since 1978, and has represented T&F on a number of industry bodies.  He has been a member of the Steering Group of the Publishing Research Consortium (PRC), funded by industry trade bodies and the major publishing companies, which commissions and publishes independent research of matters important for the future of journals publishing. He has also been a member of the STM Association Reference Group on Scholarly Collaboration Networks, and a member of the Policy Committee of the UK Publishers Association.

David is a fully accredited NCTJ-qualified journalist, and holds Bachelor’s and Master’s degrees in Politics from Lancaster University, and has a D Phil in international relations from Sussex University, which took 7 years to completion. He himself edited a number of scholarly publications for Reed International in the 1970s and 1980s, commissioned book series in futures and innovation, resources and maritime policies for Butterworths, and initiated publishing programmes in Carfax Publishing Company in Oxford from 1987.  This was acquired by Routledge in 1997, which itself was acquired by Taylor & Francis in 1999.

From the mid-1990s, David was Global Journals Publishing Director of Carfax, then Routledge in the Cinven years, and finally T&F, which bought Routledge for £90m. He was responsible for helping to build up a journal publishing programme from 30 journals worth £900k in 1987, to one publishing over 2400 journals with an annual income of nearly a third of a billion when he handed over his role to Leon Heward-Mills.

David has always looked for international expansion and outreach of our journal publishing.  He was the prime mover in setting up an Australian journals programme in 1994.  David was invited in 1996 by the South African Human Sciences Research Council to visit HEIs in South Africa to hold meetings and seminars with indigenous journal teams, with a view to reintegrating South African scholarship and research back into the global knowledge production system after the scientific, cultural and trade boycotts of the apartheid years. From that flowed the partnership with UNISA Press a few years’ later, which was the harbinger of building the current T&F Africa programme and its co-publishing partnerships.